Last week the Netball NT participation team set off in a Mitsubishi Triton, tackling 700 kms of road to deliver remote programmes to the community of Ngukurr in South Arnhem. 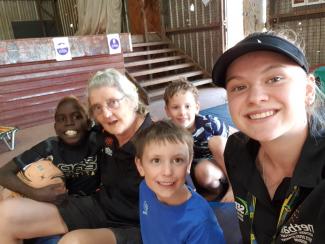 “We started the programme off with a discussion about the differences between Netball and Basketball, once the students understood this they were all very keen to begin learning new skills and were already well adept in skills such as passing and throwing.” Stated Nairn.

A total of 50 unique participants attended the sessions over the week inside the Ngukurr Sport and Recreation Hall. Local sport and recreation staff also coordinated the transportation of participants from outlying communities.

During the programme the Netball NT team focus on developing the skill set of participants, in this instance with a focus on held balls and the 3 second rule.

At the conclusion of the programme, Netball NT provided the Ngukurr community with netball equipment so that the community could continue to develop their netball skills and to play netball.

The participation team will travel to Maningrida in August to provide more remote netball programmes.

Netball assesses State of the Game