Netball NT spent the week in the presence of Australian Netball royalty as they were treated to a surprise visit from a number of Diamonds players and their Head Coach, Stacey Marinkovich last month.

Netball NT Pathway Manager Penny Shearer was on hand to assist during their stay.

"This was a rare and exciting opportunity to be a part of the Diamond’s daily training environment. Being able to work alongside them was a privilege and provided valuable insight into the coaching and training practices at the top of our sporting pathway.  Given we are currently in the middle of our preparation for the National Netball Championships the timing was perfect.” Said Shearer.

Across their two week stay the Diamonds maintained their own training schedule and participated in several meet and greet opportunities with our local netball community, across Darwin and Palmerston. 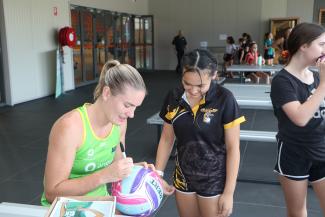 “The shear joy on the faces of our young athletes when interacting with the Diamonds was priceless and shows how important maintaining connections with our juniors and grass roots community is.” Stated Shearer.

Local coaches also benefited from the visit, with a Q & A session with Head Coach Stacey Marinkovich.

In terms of coach development, Shearer said “For our local coaches to have the chance to sit with Stacey and ask her first hand about her experiences and advice was a once in a lifetime opportunity”.

It wasn’t all Netball for the visitors as they were sure to make time to visit the sights of the Territory, before returning to Perth to start their preparation with the West Coast Fever for Round 1 of the Suncorp Super Netball 2021 season.